You are here: Home / Blog / Do You Label Your Kids? 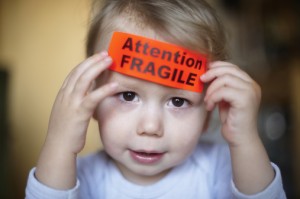 Attaching labels to kids is a less than stellar idea, right? We all know that, but how many times have you caught yourself telling people that your kid is hyper, doesn’t pay attention, or even that he doesn’t like vegetables? Labels come in all shapes and sizes and they are nearly impossible to avoid completely, but as parents, we have to be careful how we are labeling our children.

I thought I learned this lesson years ago when my oldest son started telling everyone that he was shy after hearing me say the same thing when I thought he wasn’t listing. Here’s a word of advice – they are ALWAYS listening.

Parenting mistakes tend to repeat themselves though and I’ve fallen into the same trap again. My 5 year old son has aspergers and severe asthma. We’ve made a conscious effort to avoid the use of labels with him, and to this day he doesn’t know what aspergers is. All he knows is that he hears sounds more than other people do and he has to go to speech therapy.

The problem isn’t him. It’s me.

I have gotten into the habit of labeling him to other people. It took several years to get his health and behavioral issues under control. He’s doing wonderfully now though, and while he’ll always have his beautiful little quirks, he is thriving.

As a baby and toddler, he screamed for hours a day as a result of his sensory issues. As soon as he started screaming in public, I’d turn to whoever happened to be sitting next to me and say, “He just has some sensory issues so he has a hard time here.”

Once we received the aspergers diagnoses, I was so oddly relieved just to have a name that explained what we had been going through that I told everyone about it – family members, his Sunday school teacher, the lady in line behind me at the grocery store. I said it in the guise of explaining away behaviors, like why he spent nearly an hour jumping off raised platforms at the playground, but I found myself slipping it into conversations and telling people that really had no business knowing.

For some reason I felt like I had to justify him, explain everything he did rather than just allow him to be him. I think it was partially a cry for support since the early years were such a struggle as we dealt with the diagnoses – like therapy with complete strangers. I came to realize though, that I was partially doing it for my own benefit. I didn’t want other parents judging me for his behaviors or I occasionally felt like he needed special treatment.

A Label is a Label

Good labels can be problematic too. I know many parents who are in the habit of labeling this child the smart one and that child the pretty one. Sounds like those are wonderful things to say about your children doesn’t it? Well what happens when the pretty one thinks that she isn’t smart and the smart one thinks that she isn’t pretty? Complimenting your children is a wonderful thing to do, but we have to be careful not to use our compliments to label our children and cause them to alter the expectations they have for themselves.

Growing up, I constantly heard how smart I was. It was wonderful to hear, but halfway through high school I started to realize that I wasn’t nearly as smart as everyone was telling me I was. That wasn’t me being a self-deprecating teenager. I’d just been told I was smart so often that I didn’t think I needed to put forth any effort – so I didn’t. It turns out that I wasn’t nearly smart enough to learn the material without doing the work.

I’ve been making a conscious effort not to label my children. I want them to feel free to be whoever it is they want to be, regardless of whatever label a doctor, teacher, or stranger has attached to them. I’m working on genuine praise and trying to allow for more self-discovery but it’s a learning process and I’m sure I’ll slip up from time to time.

How do you feel about labeling your children?

This post contains affiliate links. Reading is one of the few things that I do just for me. The … END_OF_DOCUMENT_TOKEN_TO_BE_REPLACED