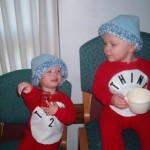 If you go to most stores in October, you will find a good selection of Halloween costumes.  You also might find that many of these costumes come with a big price tag and if you have a lot of kids to get costumes for, then that can really add up. I have found that the ready-made store costumes also are not made very well at all.  If I pay that much for a costume, I really want my child to be able to play dress-up with it later.  Many of the costumes that I have bought at the discount department stores fall apart after wearing it only one time.  So, I have to look for other ways to find costumes for my kids that I will get more for my money or very little money at all. With a little creativity, you can make a perfect costume that won’t break the budget.

I remember growing up we never had money for Halloween costumes.  My mom would always help us make a costume from scratch.  I think those were my most favorite Halloween costumes.  I remember being a witch and a bag of Jellybeans.  Neither of these costumes cost my mom much money to make either.  If you can sew, there are a lot of costumes you can make for your child.  I found a ton of free tutorials online for making kid’s costumes.  You can also find lots of patterns at sewing and crafting stores that can help you get started.  Add a few inexpensive items to that and you can have a really fun costume for less money than you would pay for a store bought costume of equal quality.

Making homemade costumes is so much easier when using places like thrift stores to find the perfect item for your costume.  If you are wanting to be a princess, you will probably be able to find a nice dress for maybe $5 to use for your costume.  You can also find items to complete costumes there as well.  Someone told me they bought several dolls from a thrift store and made a wig for a costume.  A clown costume would be perfect to find at a thrift store.  Just look for old bright clothes a few sizes bigger and you have a great costume.  You can also find big shoes to wear over your child’s regular shoes to look like the big clown shoes.  There are just so many fun things that you can get at a thrift store to make or complete a costume for Halloween.  So, make sure you check those places out.

There are also a lot of companies that make really nice costumes that are really expensive but the costumes last a lot more than one year.  Many of these costumes can be found online or in yard sales for a fraction of the original price.  So, those places might be a good place to look for used costumes too.

I like to use the Dollar Stores to find items to complete my kids’ Halloween costumes.  They are a great place to find plastic tiaras and wands for princess and fairy costumes. They also have great accessories for police and fireman costumes.   One year my little one wanted to be a rescue worker and we found a rain jacket that looked like a rescuer’s jacket on clearance at Wal-Mart for $3.00 and then I just added some items I found at the Dollar store and it made a really nice costume for about $5.

Use What You Have

Decide what your child wants to be and then look around your house for some items to complete the outfit. Here are a few ideas.

Mummy- Toilet paper could be used to make a mummy costume and then you can just make the eyes darker with eye make-up.

Zombie- Old clothes can be used to make the now popular zombie costumes.  Just use scissors and cut the fabric and you can even rip it in some palaces and then add fake blood which you could make at home and you have a zombie costume.  You can throw away the old clothes after you are done.

Sports figure- Use old sports clothes to be a basketball, football, or other sports player.  If your child takes dance, you could use the outfit to be a ballerina. Many people already have these at home so the cost could even be free.

Cub Scout/ Girl Scout- My son went one year just wearing his Cub Scout uniform and since we already bought it for cub scouts I was not out any other money.

Black Sweats- Black sweats can be used to make a lot of different costumes.  For a skunk, you would just add tape down the back. You could also make a cat costume by just adding a few items.  One of my sons wanted to be a scary person this year so we bought a mask and a devil poker and he is wearing sweats making the costume so much cheaper.

Wig- Many costumes need wigs.  You can make your own with left over yarn at home.

This post contains affiliate links. Reading is one of the few things that I do just for me. The … END_OF_DOCUMENT_TOKEN_TO_BE_REPLACED