You are here: Home / Blog / Health: Preparing for Your Child’s Tonsillectomy 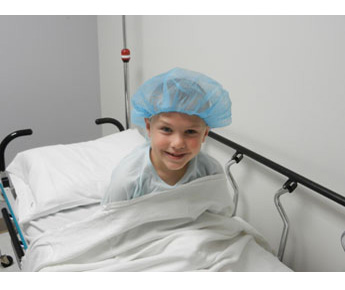 Over the past two years, my three younger children have had reoccurring strep throat and they were missing quite a bit of school because of it. After paying a visit to the doctor many times with strep, she finally recommended an ears, nose, and throat specialist. After the visit to the specialist, we scheduled a tonsillectomy. We decided to have all three kids go on the same day for the surgery. I thought it would be nice to share with other moms what the experience was like for us. I really did not find very much information online about the surgery so I’m hoping this may help someone. While I am not a doctor, or any other medical professional for that matter, I can tell you some things that I learned along the way after experiencing the surgery with three kids.

Our pediatrician had to refer us to a specialist. This is usually done after a child has had at least 4 episodes of strep throat or the child’s tonsils are enlarged or possibly if your child is experiencing sleep apnea. The doctor’s visit was very informative and their nurse talked to me about what to expect during and after surgery.

The day before the surgery our children were not allowed to eat anything after midnight. I had a special dinner for my children the night before the surgery of their favorite foods, since they would not be eating much after surgery. I thought this would be really nice and special for them.

My children are seven year old twins and a five year old. They were really scared about the surgery and what was going to happen during and after. I tried not to talk about it until the day before. I let my kids watch this movie that I found on Youtube about kids getting their tonsils removed. My kids seemed to really like that. I do think it was important to talk about what was going to happen to prepare my children without getting into a lot of detail and frightening them.

My kids were taken to surgery and were “masked” before putting in the IV. I was really glad that they were able to do this because it just makes the whole experience easier on the child since they are put under before the IV was inserted. The actual surgery lasted about 20 minutes and then our children spent time in recovery for about 30 minutes or until the nurses could get them to wake up. We were not allowed in the recovery room. After that they were sent to a hospital room. The surgery required my children to stay overnight. I think the main reason is to make sure they do not have an allergic reaction to the pain medication. I was told a room number and went to that room to meet my child. My husband stayed in out-patient surgery with the last child. When I went to visit my child, he was really crying and not happy. He asked me for water. I poured him some, but he decided he did not want to swallow it. After that he went to sleep for awhile as they had already medicated him before leaving surgery. Soon after my next child came and acted about the same way. The third child out of surgery was the most unhappy one of all of them. He cried really hard and cried bad for his daddy in the recovery room, I was told. He went to sleep too soon after getting into his hospital room. After a few hours my kids woke up and were crying. The nurse told me they were ready for pain meds. I want to prepare you, getting that first medication down them was really hard. They did not want to swallow. My children were given a strong liquid pain medicine that contained hydrocodone. It tasted awful and stings going down, but really helps to numb the throat. My doctor ordered them on it around the clock for the first few days. This really helped them if we could get them to take it. I had trouble with my youngest child. He spit it out the second time and they could not give him anymore because they did not know how much he took. It was a very hard 4 hours until his next dose. We ended up working all night to get him to take his medicine, he simply refused and you could tell he was in a lot of pain. The nurse, however, was really helpful in working with us and we ended up bribing him, but he finally took his medicine and shortly after began to feel better and eventually fell asleep. At lunchtime they brought my kids ice cream and Jell-o. I tried to make them eat it but they really only ate one or two bites. This worried me but the nurses assured me this was completely normal. I was also encouraged to get them to drink liquids. My kids drank water and apple juice. I was told that our children might also experience nausea, they may even throw up. This is completely normal as well and is usually from the anesthesia. I only had one that experienced nausea, but thankfully did not throw up. Another child broke out in a rash but it was not from the medication, he was allergic to the hospital gown. The next morning, my kids were served a breakfast of scrambled eggs and a piece of bread. They all ate this better than I expected. They were so hungry they ate really well. In fact, one of my kids asked for seconds and asked the nurse for the recipe. I had to laugh at that one, especially since both my husband and I thought the eggs were . . . well . . . not very good.

My children were allowed to come home the day after surgery since there were no complications. Once we got home, my kids slept a lot during the day and woke me and my husband up all throughout the night. Be prepared, we did not get a lot of sleep the first few nights. They wake up just before the next dose of pain medication was due. They seemed to get better about day 4 with pain, but days 5-7 were still not great. They say that is when the scabs fall off and they will still experience quite a bit of pain. By the 7th day we started using only Acetaminophen for pain and it wasn’t needed around the clock, they were sleeping all night at this point.

We stayed at home a lot since they tell you not to go around anyone who is sick because your child will be more likely to catch something while they are healing. We let our children watch any dvd they wanted to or play almost any game they wanted and this usually kept them calm and happy. They enjoyed playing video games but we had to limit certain games since they are not suppose to do a lot of physical activities for awhile and some modern games require you to move around.

The hardest part at home was feeding them or getting them to eat. Our kids probably lost weight during recovery. My kids started out with scrambled eggs then after a couple of days at home ate chopped up hotdogs. They also enjoyed butter spaghetti and, of course, macaroni and cheese. I would suggest finding things your kids will like and they will be more likely to eat. My kids ate a ton of popsicles. I just had to make sure to take out the purple and red ones. These color foods are not recommended because if they throw up you might not be able to tell whether or not a child is bleeding, which can occur. I also froze Go-Gurt for my kids, they love them frozen. My kids did not like things that were hot so I had to let foods cool before serving them. Milk products, like ice cream, are really not that great because it causes a film on the back of your mouth that causes you to cough, and that hurts. Peanut butter is another thing my kids loved before surgery but it also caused a film at the back of the mouth that was not good for them. I was told to avoid hard foods like chips and other hard snack foods as it can tear the scab off and cause bleeding, which you want to prevent. When home, we continued with liquids as this also helps with healing and prevents them from having other problems. Another thing we did that our doctor recommended was give our kids chewing gum. We started this on the way home from the hospital. This helps them get the muscles working properly again.

Some people say that a child will have really bad breath during recovery. My kids really did not experience this and I think that the gum may have helped prevent this. I also had them wash out their mouth every night by swishing water and added brushing teeth when they were ready. Don’t let anyone convince you that this surgery easy. It is really rough for about a week, but it does get better after that first week and our kids were fine after about two weeks. When my children were one week past surgery they did not asked for pain medication that much and are eating most foods except the hard stuff.

Some people ask me would you do all three together again if you had to do it over. I really think I would. My kids helped each other since they were all going through the same thing. They all ate the same and nobody really complained much because they didn’t see the others eating something they could not have. I am also glad it is all over and I do not have to go through all the recovery again.

Frugal Decorating: Metallic Pumpkins
Parenting: Why Does the Baby Have 11 Toes?