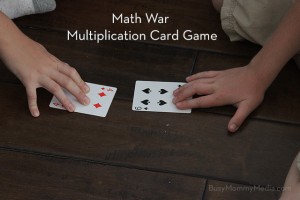 Memorizing multiplication facts can be a tedious chore for active kids, especially for little boys who have a hard time sitting still. Having a strong grasp on basic concepts like multiplication facts can make a major difference for kids as they try to master more complex math concepts though so it’s important to create a firm foundation early on.

My kids love playing games so anytime I can turn an academic concept into a game they are big fans. This multiplication game is a twist on the classic War card game that everyone knows and loves. It can be adapted for kids of all skill level so you can increase the difficulty as your child strengthens his math skills. 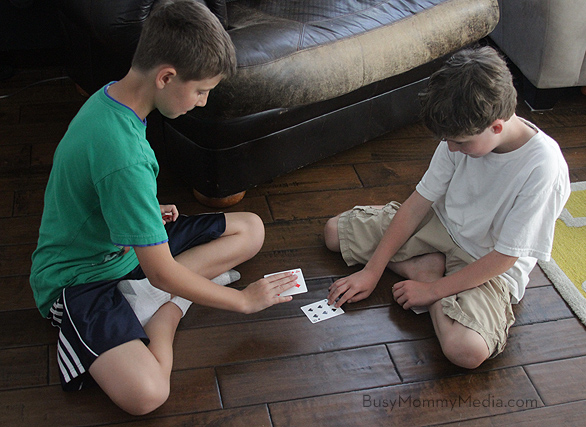 To set up your deck of cards, pull out all the face cards. You won’t need them for this game. Set them aside and shuffle the remaining cards.

Deal equal cards to both players.

Each player lays down a card at the same time. In the original rules of War the player with the higher ranking card gets to keep both cards. In this version, whoever can multiply the two numbers together first wins the cards.

Continue playing until one player runs out of cards.

When playing with my kids as they are first mastering their multiplication tables I tell them I will count to 5 before telling them the answer. That gives them a fair head start but still requires them to work on thinking quickly.

For younger kids, you can make this an addition game. Whoever can add the two numbers together first wins the cards.

What are your favorite ways to teach your kids their multiplication facts?

Deal Alert: Buy One Get One for $0.88 at Crazy 8!
Tips and Tricks for Creating the Perfect Baby Registry

This post contains affiliate links. Reading is one of the few things that I do just for me. The … END_OF_DOCUMENT_TOKEN_TO_BE_REPLACED