This post is part of a social shopper marketing insight campaign with Pollinate Media Group™ and Barilla, but all my opinions are my own. #pmedia #JoytotheTable  http://cmp.ly/3/8vNxcO. 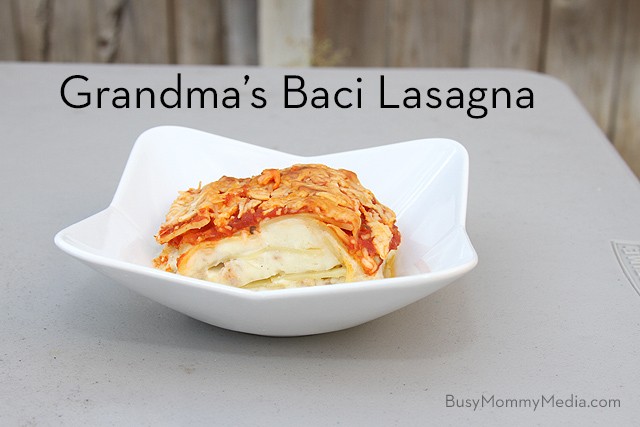 Many of the memories I have of my grandmother are centered around food. Her making sandwiches for us after we came in from playing on the playground. Offering us one of the 50 kinds of ice-cream she always kept in the fridge. Split pea soup bubbling away on the stove and making the entire house smell delicious.

It’s no surprise that one of the most treasured things in my kitchen is a small little cookbook that she put together with all of her favorite recipes. She left us several years ago but I always love going through that little homemade cookbook and recreating some of the food that so often graced her table. 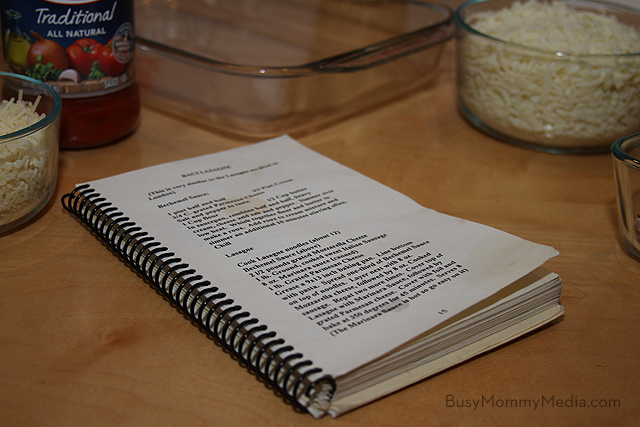 While I’ve tried most of the recipes in that cookbook, there’s one that I’ve left untouched. Her recipe for Baci lasagne always looked delicious but I was scared off by how complicated it seemed when I first read through it years ago. It’s amazing what a difference 10 years can make though. I usually skip right past it but I decided now was the time to give it a try and I’m SO glad I did. Not only is it the most richly delicious lasagne I’ve ever tasted but it’s not nearly as difficult as I feared it would be.

This may be a new holiday tradition.

My kids practically licked the pan clean. It was that good. And very fattening, which at the moment, isn’t really a problem for me.

The main difference between this and most of the other lasagne recipes I have tried is that this one uses a rich bechemel sauce instead of ricotta cheese. The sauce was so good by itself I had to fight my family off of it. My husband was dipping chips in it while my kids were just grabbing spoons and going to town.

I’m telling you, this one is a winner.

First step was a trip to my local Vons to gather ingredients. Right now you make this recipe and save some cash. Safeway stores have an in-store promotion for $1 off the purchase of ONE (1) box of Barilla® Lasagne and ONE (1) Barilla® Sauce. 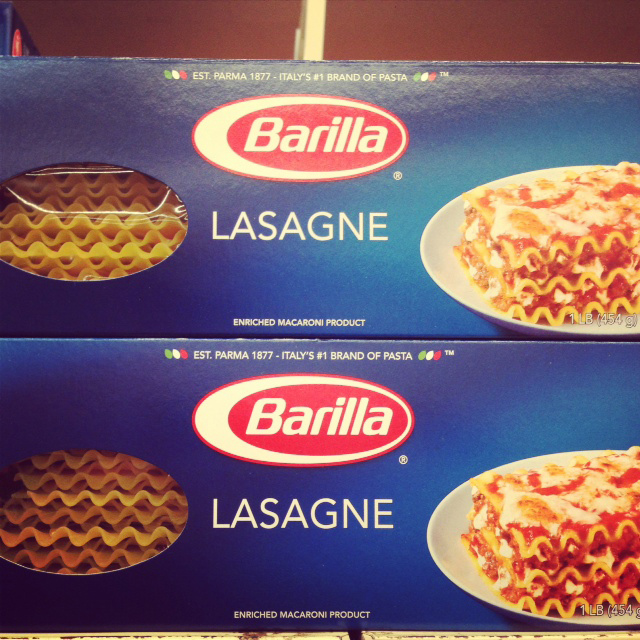 Make the Bechemel sauce ahead of time so it can cool a bit. The original recipe called for mixing the half and half, cream, and parmesan, then mixing the butter and flour separately before combining. I’ve always made my roux butter and flour first so that’s what I did. Melt the butter in the bottom of a small pot then add the flour. Mix and cook for a few minutes. Pour in the half and half, cream, cheese, and season with salt and pepper. Cook for about 10 minutes, stirring often. Then remove it from the heat and let it chill.

To assemble the lasagne, start with a layer of Barilla Lasagne noodles in an oiled baking pan. (No, those are not my hands. I put my husband to work since I’ve had issues eating food that I’ve cooked since morning sickness kicked in. 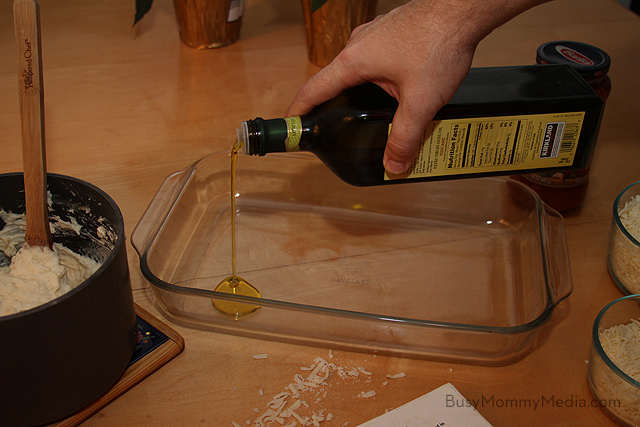 Spread 1/3 of the bechemel sauce on top. Layer with cheese and cooked sausage. 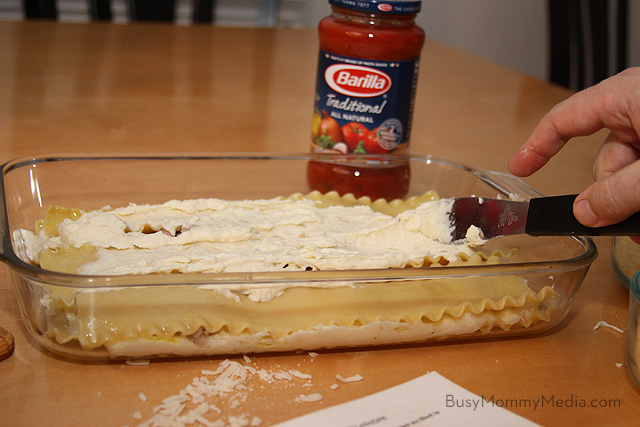 Top the entire thing with one more layer of pasta then cover with marinara sauce and grated parmesan cheese. 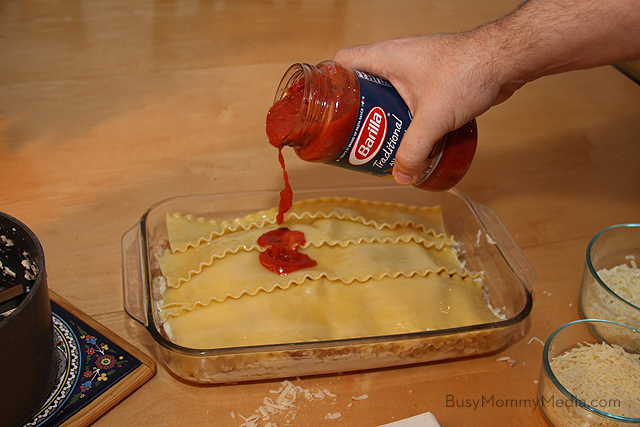 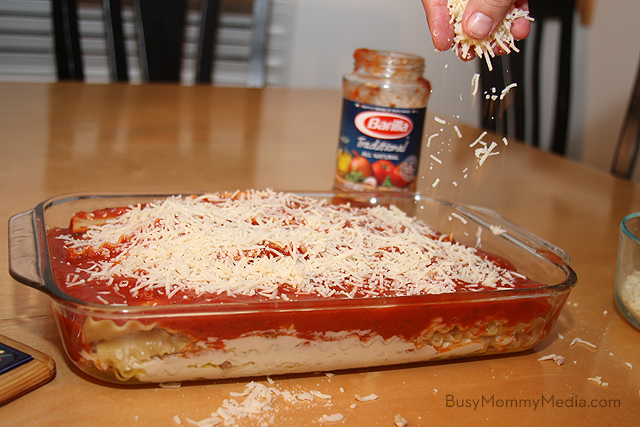 Cover with foil and bake at 350 degrees for 45 minutes. 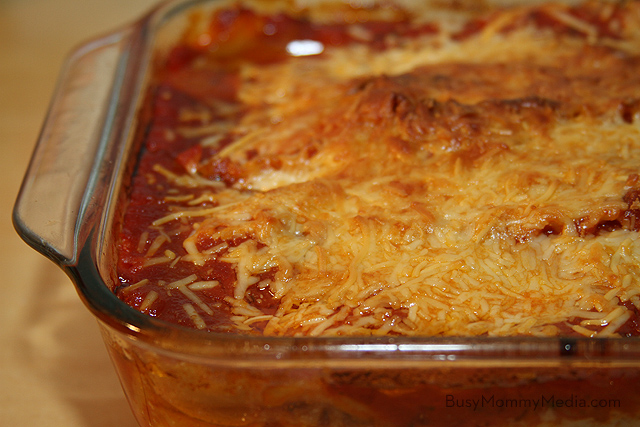 I know we did!

This post contains affiliate links. Reading is one of the few things that I do just for me. The … END_OF_DOCUMENT_TOKEN_TO_BE_REPLACED