You are here: Home / Blog / Review: The Lego Movie 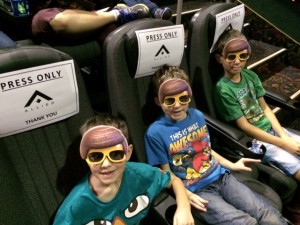 I’m outnumbered in my house (for the moment anyway) and with a houseful of boys that means Legos rule. So when my kids discovered that The Lego Movie was coming out, it’s dominated their every waking thought since then.

The Lego Movie is the story of Emmet, an ordinary guy/ Lego minifigure, who is happy being ordinary. The styling is much different than the other Lego movies out there. The characters and scenes are all made with Legos and filmed in a smoother version of stop-motion.

They were thrilled to death to go to an early preview of the movie and since they are far more qualified to give their opinion on this then I am, I wanted to share some of their impressions with you.

The movie was hilarious! I really liked Emmet because he was just a regular guy then he discovers how creative he is and becomes extraordinary. He becomes a Master Builder by the end of the movie. A Master Builder is a person who uses their imagination to create things instead of following instructions. That’s what I do with my Legos so I thought that was cool. I liked that he could build cooler stuff by being creative.

The Lego Movie is one of the funniest movies I’ve seen. My favorite part was when Emmet comes out of his apartment and was so busy reading instructions that forgot to even put his clothes on. When he realizes he’s naked he says, “Oops, almost forgot that one”.

The characters are really cool, especially Emmet. At first he isn’t that creative and doesn’t have very many good ideas and then he learns how to build really cool stuff and becomes a Master Builder.

The movie was really good. I liked that Batman was in the movie. Can I see it again?

So there you have it. The Lego Movie was a definite hit at my house. My kids spend half the day singing “Everything is awesome . . . “

Go see the movie. I promise that song will be stuck in your head too.

Have you seen The Lego Movie yet? What did you think of it?