Disclosure: This post has been sponsored by Vtech, however all opinions are my own. Vtech provided product to facilitate my review. 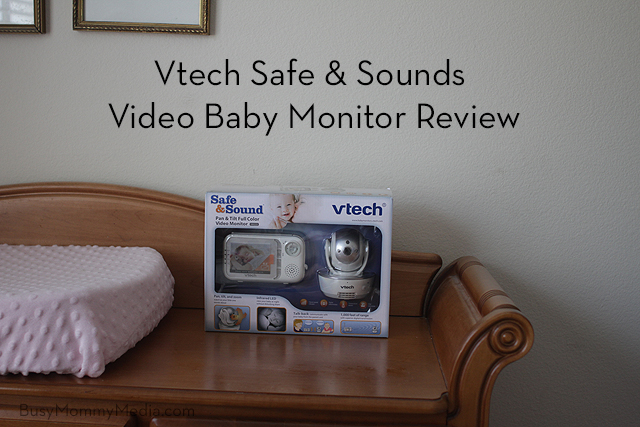 I’ll admit, I’ve been firmly in the “baby monitors are not essential” camp for a while. I had a bad experience with baby monitors when my oldest was a baby and haven’t bothered with them since. I’m not too proud to admit though, that I have changed my mind. I’ve been playing around with the Vtech Safe and Sound Video Baby Monitor for the last little while and I am in love with the thing! It’s light years beyond the baby monitors I’ve tried in the past and has really helped simplify my toddler’s sleep routine, which has been great considering I’m 35 weeks pregnant with twins and not moving around much these days.

When my oldest son was born I went through several baby monitors. The sound quality on the first few was terrible. I was happy when I finally found a baby monitor with decent sound quality but was terrified when I woke up one night to hear a man’s voice coming through the baby monitor. I rushed into the nursery positive someone was trying to kidnap my baby only to discover that my baby monitor ran on the same frequency as my neighbor’s portable phone. I gave up on baby monitors after that and haven’t looked back.

When Vtech contacted me about trying out the Safe and Sound Video Baby Monitor I decided it was time to give baby monitors another shot. I’ve mentioned before that my toddler decided to give up on her crib despite the fact that I wasn’t ready to make the transition. Moving her into a toddler bed has made bedtime . . . interesting. Some nights we check on her long after she’s been put to bed only to find her playing with toys.

The Vtech Safe and Sound Video Baby Monitor has some really cool features that have come in handy with my toddler:

Night vision. We usually just put her in bed and shut the door, which means in order to find out if she’s sleeping we have to open the door and hope we don’t wake her up on the off chance that she actually went to bed. The night vision feature lets us watch her and see what’s she’s doing after we close the door. Apparently she’s a big fan of wandering around her room and finding toys to hide in her bed.

Two-Way Communication. I love being able to hear my toddler on the baby monitor. The other night she sat on her bed and said “It’s dark. It’s dark.” I felt bad that she was scared so went right in and turned her nightlight back on, which helped her go to bed much faster than she would have otherwise. The fact that I can talk back to her, though, is amazing . . . even if I scared her to death the first time I used this feature. I can watch her while laying in my bed and tell her to get back in bed as soon as her feet hit the floor. She may be a bit confused about how I knew what she was doing and where my voice is coming from but she usually jumps back into bed when I ask her to.

Swivel Camera. Since my toddler is no longer in a crib she doesn’t really stay in one spot. I have the camera pointed at her bed but I can move the camera around to find her if she gets out of bed. This came in handy the other night when I decided to check on her after she’d been laying in bed for over an hour. When I didn’t see her on the monitor I swiveled the camera around until I found her quietly playing with toys on the other side of the room. A quick reminder to get back in bed was all it took for her to get back in bed and then fall asleep soon after. 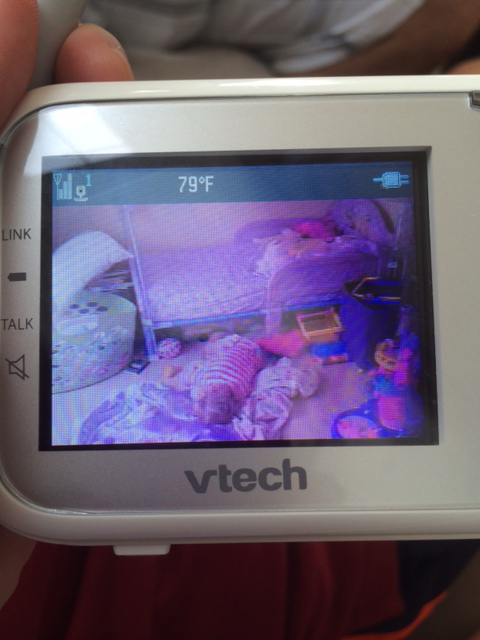 I’ve loved getting a glimpse of what my toddler does behind closed doors when she is supposed to be sleeping. Apparently she likes to surround herself with toys then fall asleep on the floor. It’s helped me have a better idea of how long she’s actually napping for and what parts of her bedtime routine are just not working.

I’m expecting twins anytime now and assumed that I would be using the Vtech Safe and Sound Video Monitor with the new babies but after experiencing it with my toddler I think I’m going to be using it to keep an eye on her while I’m tied up taking care of the twins. Of course, you can even add additional cameras so maybe I’ll be setting up an extra camera to look over the twins!

Do you use a baby monitor with your baby or toddler? What features do you use the most?

This post contains affiliate links. Reading is one of the few things that I do just for me. The … END_OF_DOCUMENT_TOKEN_TO_BE_REPLACED