You are here: Home / Blog / How to Teach Kids to Cook with Illustrated Recipes

Thanks to Cook by Colours for sponsoring this post.

Cooking with kids is so much fun. I start my kids cooking when they are young and it is fun watching their skills develop in the kitchen. Cooking with young kids can be a bit frustrating for them if they can’t read the recipe.

There’s a fantastic solution for this. Cook by Colours is a fully illustrated cookbooks that lets even the youngest kids cook a recipe from start to finish on their own. 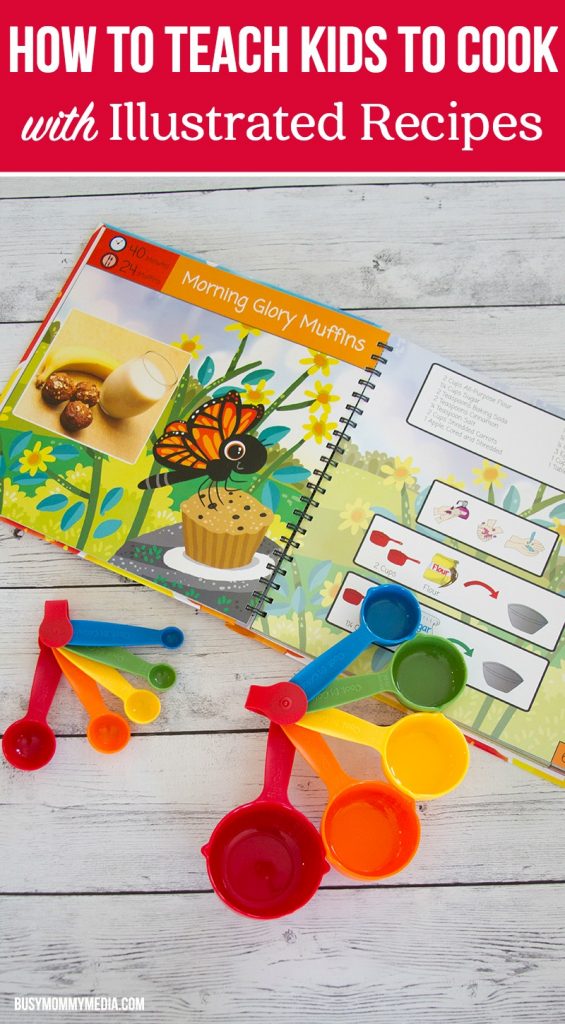 Instead of having to read a recipe and measure 1/4 cup of sugar, Cook by Colours shows the child that they need to use the green measuring cup. Everything is completely visually based so your child can follow the recipe on their own.

Cook by Colours has been very popular in Canada and is just launching in the U.S. (you can now get it on Amazon). I think it is going to be a huge hit. There are very few children’s cookbooks that make it this easy for kids to learn how to follow a recipe and practice basic cooking skills.

My 5 year old daughter absolutely loves to cook. It’s her favorite thing to do these days and she gets frustrated when she can’t do more on her own. She has some pretty solid cooking skills already but, since she can’t read, following a recipe on her own is a bit out of reach. She was so excited to see that the Cook by Colours was designed so she could follow it. 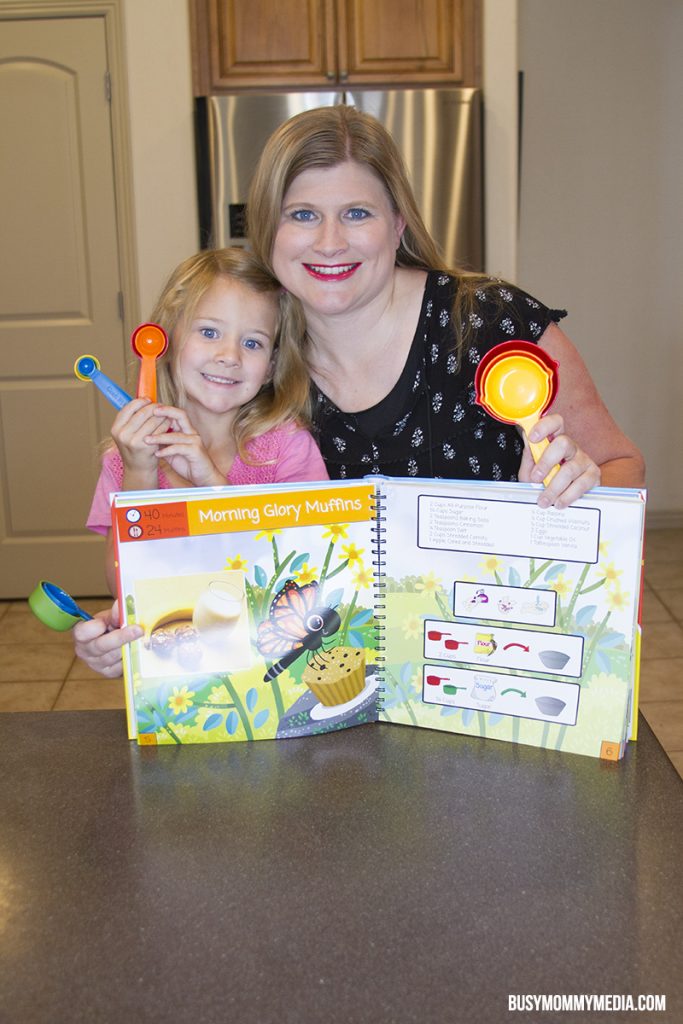 Now she’s asking to cook every single day and she’s so proud of herself for following the recipes on her own.

The first recipe we made together from the Cook by Colours Cookbook was Morning Glory Muffins. My kids love muffins for a quick breakfast and we were really excited about these because they had so many healthy ingredients in them like raisins, walnuts, and carrots. 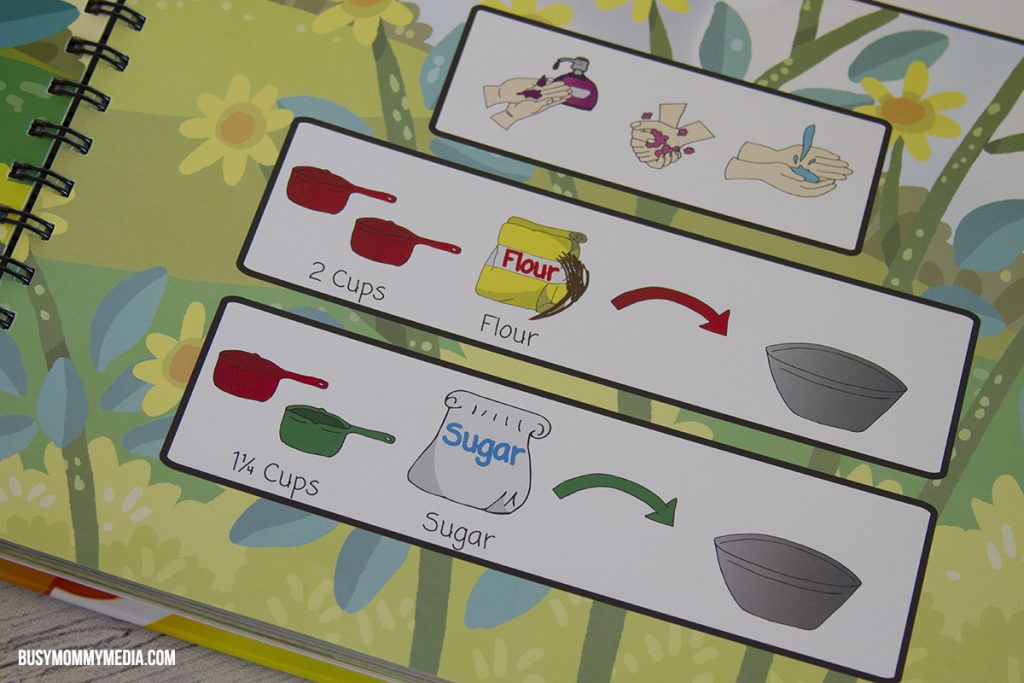 Just like all the other recipes in the Cook by Colours cookbook, the recipe was completely illustrated so even the youngest cooks could make the recipe on their own.

I told my daughter she was the cook and she could give me instructions if she wanted help with anything. She loved telling me what to do and I could see her confidence growing as she followed each step of the recipe. 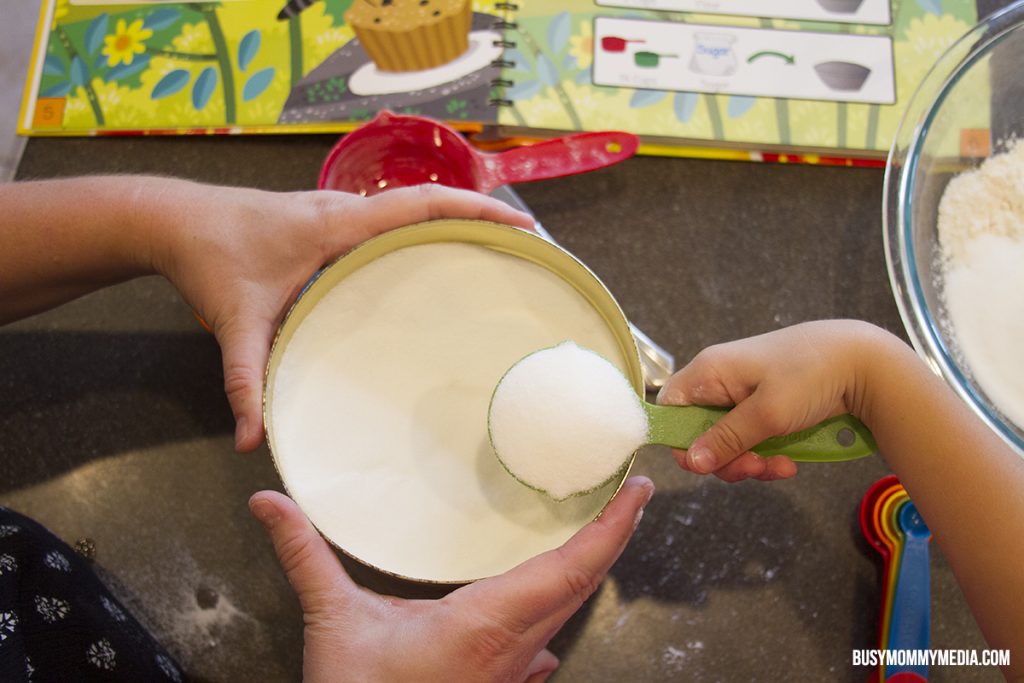 In some steps, there are two cups or spoons full of an ingredient so the illustration will show two of them. 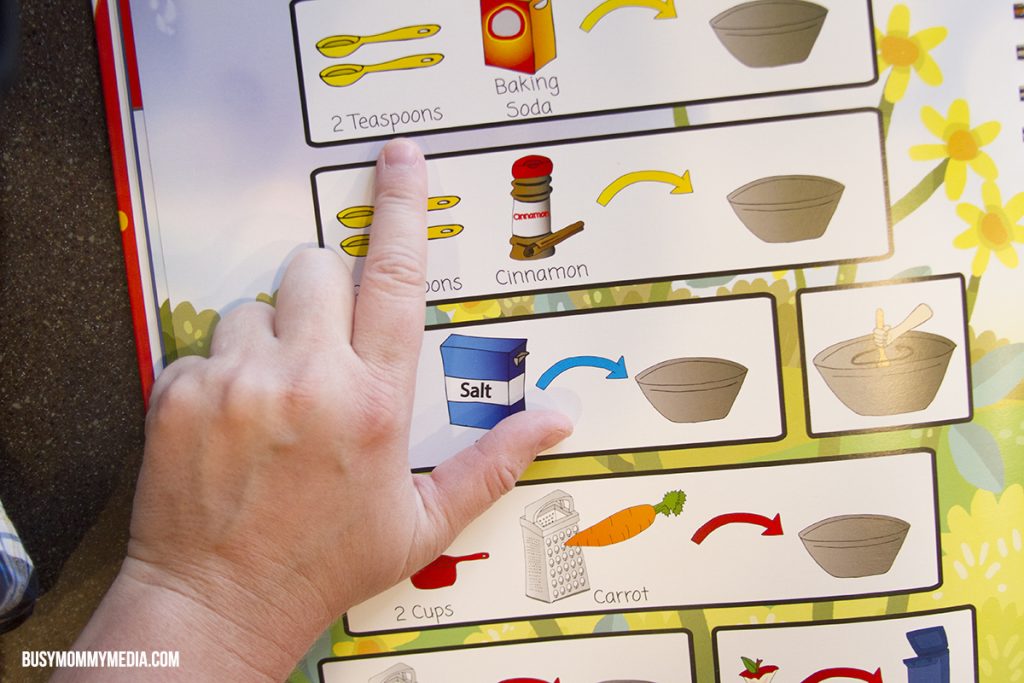 I helped her on a few of the harder steps (like grating an apple), but made sure that she was the one doing the majority of the work so that she would learn how to do it on her own with a bit of practice. 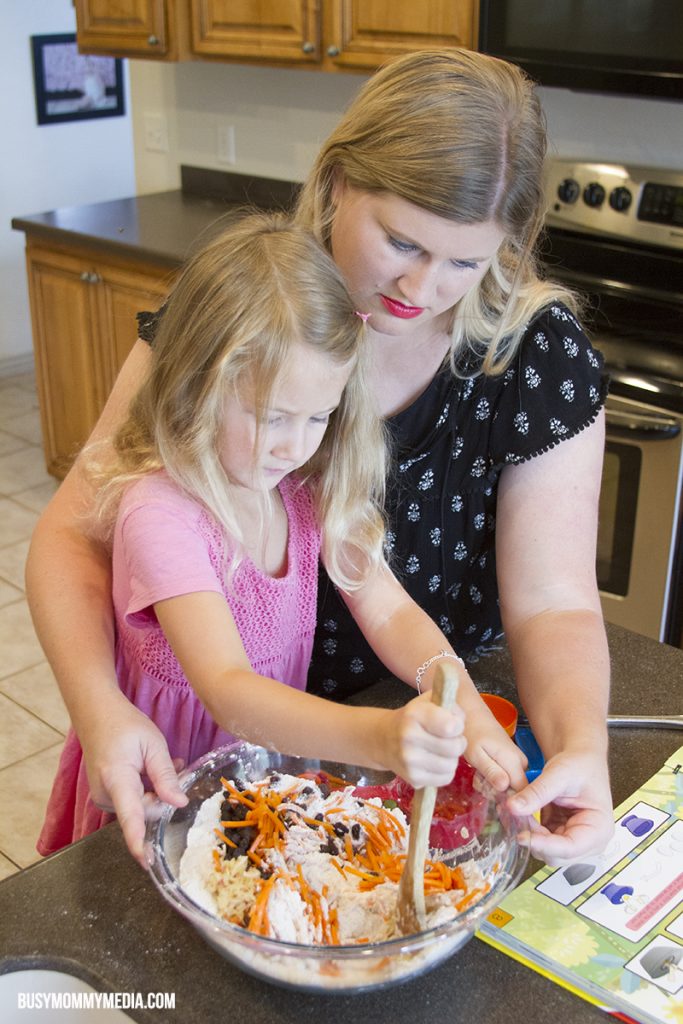 The instructions were so easy to follow that it really made the experience a lot of fun for both of us. 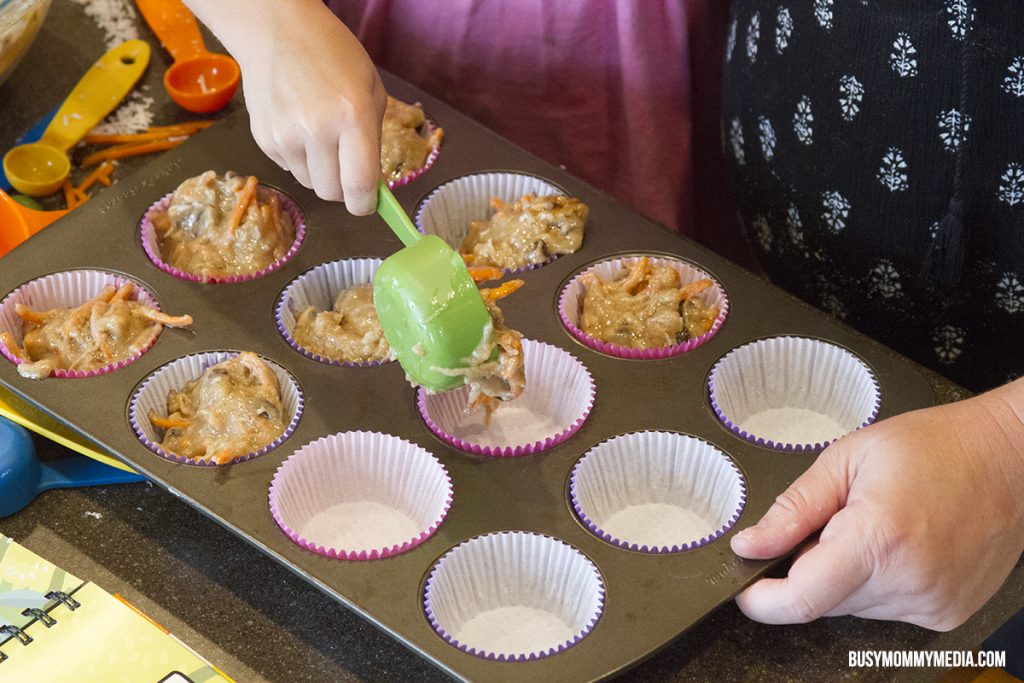 I was expecting fairly simplistic recipes in an illustrated kids’ cookbook but I was pleasantly surprised that the recipes were not only kid-friendly but adult-friendly too.

We have absolutely loved everything we have tried so far and I loved seeing so many healthy ingredients incorporated into the recipes. They even have a chocolate cupcake recipe made with spinach puree.

The Morning Glory Muffins are a new family favorite (we made two batches in one day) and I’m sure we are going to be making them again sometime soon. My daughter has been asking to try a new recipe every day because she loved it so much. 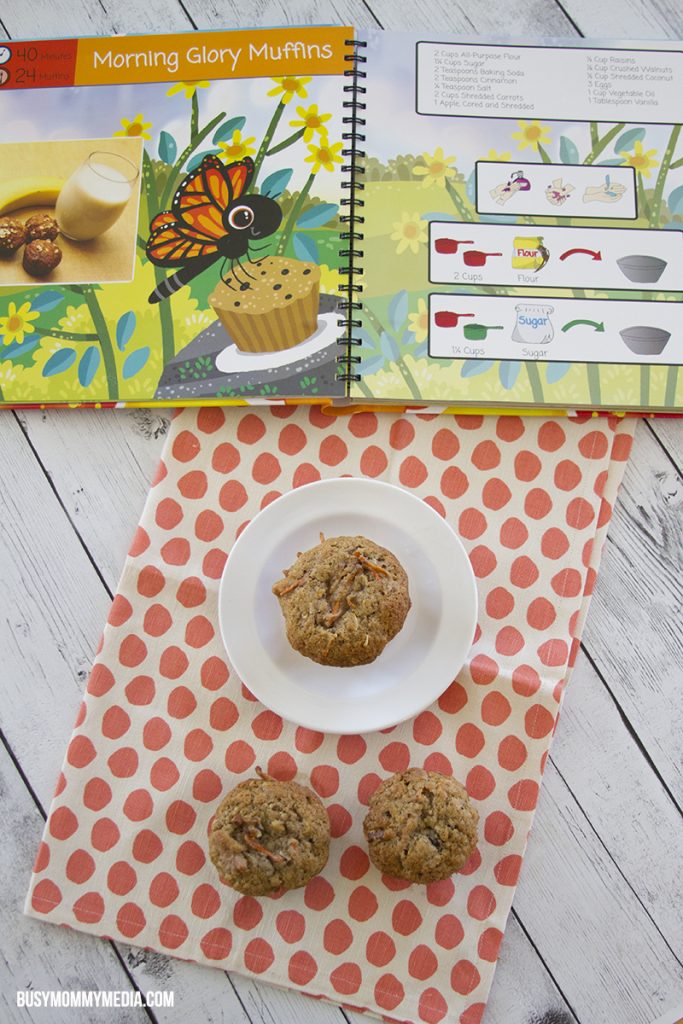 More than the cooking skills that Cook by Colours gave my daughter, I love what it has done for her confidence. She is reading recipes on her own and so proud of that. The illustrated instructions are teaching her important skills she needs to follow a written recipe once she learns how to read, and she’s learning pre-reading skills at the same time. 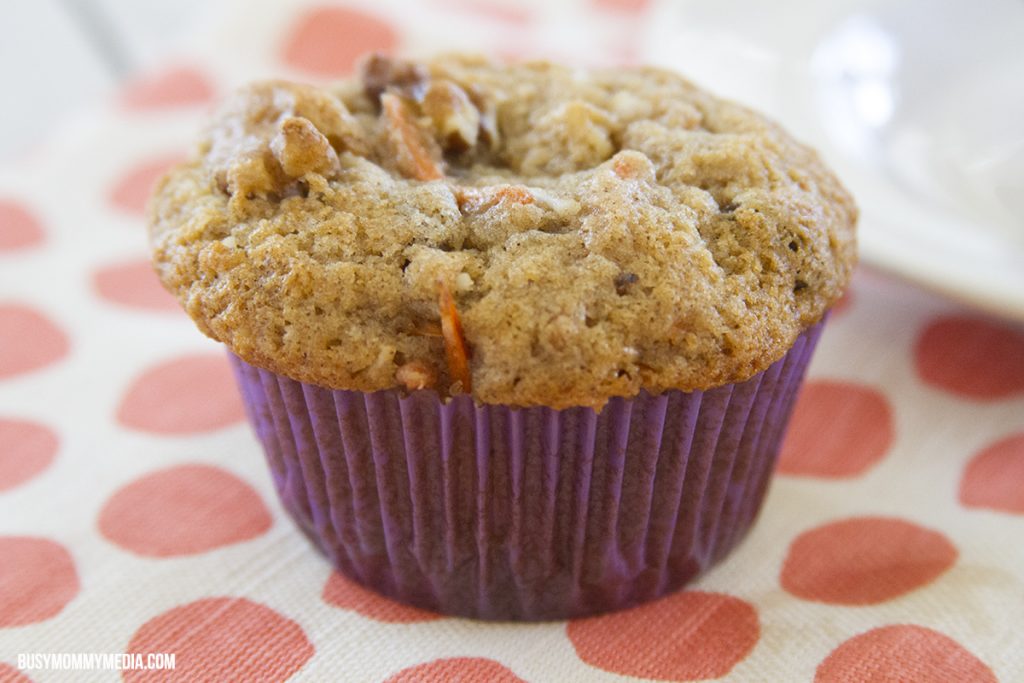 You can find the Cook by Colours Cookbook set (with measuring cups/spoons) on Amazon. This would make an amazing gift for kids who are interested in cooking and a great way to help kids build their confidence in the kitchen.

How to Make Money Selling LipSense (and a GIVEAWAY!)
How to Treat Swimmer’s Ear Naturally

This post contains affiliate links. Reading is one of the few things that I do just for me. The … END_OF_DOCUMENT_TOKEN_TO_BE_REPLACED