You are here: Home / Education / Homeschooling / Why I Homeschool 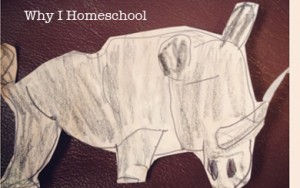 Schooling decisions have been complicated in our family. We’ve tried both public school and homeschooling and right now, homeschooling is what works for us.

I’m frequently asked why we decided to homeschool. I realize that for many people, homeschooling is just not something that has crossed their mind and some people wonder why we have made this choice for our family.

Like any decision, our reasons for homeschooling are varied and it’s hard to pin point one final thing that really made the decision for us. The truth was, it wasn’t an easy decision. There are pros and cons to nearly everything in life and I never expected the schooling choices I made for my kids to be so difficult. I’d always assumed my kids would head off to public school when they turned 5, but when that path didn’t work for my kids, we had to look into different options.

As tempting as it is to wrap our kids in bubble wrap to keep them safe, the sad fact is that they are likely to be faced with unsafe situations during their lives. I’ve made an effort not to be a crazy, overprotective mom, but when a child abductor decided to start hanging around my oldest son’s kindergarten school (complete with stories about lost puppies and moms in the hospital) my guard was up. During second grade we were faced with a school shooter — some lunatic decided it was a good idea to come onto the playground during recess and start shooting. We’ve dealt with schoolyard bullies who sent my son home with a black eye and teasing that lasted throughout the school year — and we were in good school districts.

I watched as my once bright-eyed son became nervous and stressed and as my second son prepared to start kindergarten I knew I wanted better for them. We’d already homeschooled for one year and the difference in the confidence level and happiness of my son was drastic. The safety issue alone nearly made the homeschooling decision for us. Now, each time I hear about a school shooting (in schools where “that would never happen”) and another dangerous situation, it reinforces my decision all over again. 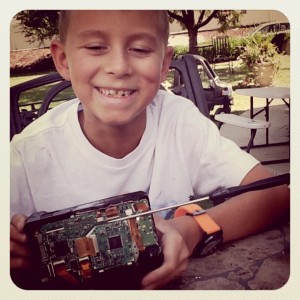 Some kids do very well in public school — they have a learning style that matches the way the school teaches and they work well in large groups with a structured environment. Some kids don’t. Mine didn’t follow the curve. I have a kindergartener who has aspergers and is working at nearly a 2nd grade level and a 3rd grader who reads on a 7th grade level but who has trouble writing. Both of them are very hands-on learners (although one is more of an independent learner than the other) and neither one of them fits in a traditional classroom. We’ve tried twice with my oldest son and he’s been bored both times.

Homeschooling children with very different learning styles is challenging, but I know that they are getting the individualized attention that they need and they are thriving.

My 6 year old has very mild aspergers and the sensory issues that go with that. The public school system wanted him to spend half of his time in a special ed. classroom. For a child who is working well above grade level, it seemed silly to me to put him in a slower paced class. When you throw in the fact that he has severe asthma and ends up with pneumonia nearly every time he catches a cold, it just made sense to create a learning environment that worked for him as an individual. 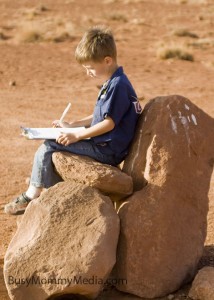 When my oldest son was in first grade our family was going through a lot of changes. Our youngest son had just died, we’d sold our house, and we wanted to make some changes so we decided to travel a bit and figure out where we wanted to live. This would not have worked with public school. We spent several months in one place and then relocated to another area. Homeschooling allowed us to turn our travels into an educational experience rather than causing a disrupted education.

I got used to the flexibility of homeschooling and when we returned to public school the following year, I found myself getting irritated having to follow a predetermined schedule and curriculum when I knew that there were things that worked better for our family and for my children individually. I found myself pulling my oldest son out of school so we could go explore local tide pools and museums and when I realized that all he’d missed were a few worksheets and sometimes a movie that he’d already seen, I began to doubt whether public school was really the best long-term solution for us.

Lack of socialization is the biggest argument people have against homeschooling. Educationally, it’s obvious that one-on-one attention far exceeds what you get in a large classroom environment. But many parents believe that their kids need to be in a large group of kids to be properly socialized. Having gone back and forth between public school and homeschooling, we had the interesting opportunity to really see both sides of things.

In public school, my oldest son is a follower. He bases his interests around what his friends like and doesn’t stop to think about what it is he likes. He became anxious and stressed in public school and my once enthusiastic learner suddenly thought school was boring.

As a homeschooler, he is outgoing and friendly and will spend hours reading books or learning about subjects that he finds interesting. Right now he’s decided he is in love with Geometry and despite the fact that his public school friends tell him that they hate math, his opinions stay set. My younger children have never been to public school so they haven’t gone through the same transition as their brother has and my hope is that they’ll be happier for that.

I’m not against public school in any way and I firmly believe that every parent needs to make schooling decisions based on their family’s individual needs. We evaluate things each year to be sure that the choices we’re making are the right ones for our kids. I’m committed to educating my kids, not necessarily to educating them in a predetermined way. If homeschooling continues to work, we’ll keep going with it. If we get to a point where there’s a better choice for what our kids need, then we’ll look into that.

How did you decide how to educate your kids? 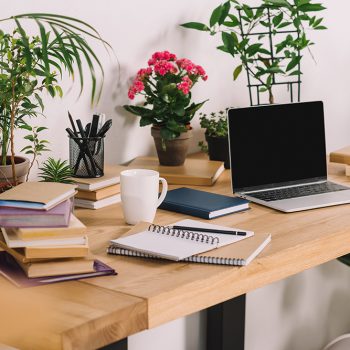 If you have young kids, it can make having a career of any sort a bit more challenging. Sometimes … END_OF_DOCUMENT_TOKEN_TO_BE_REPLACED