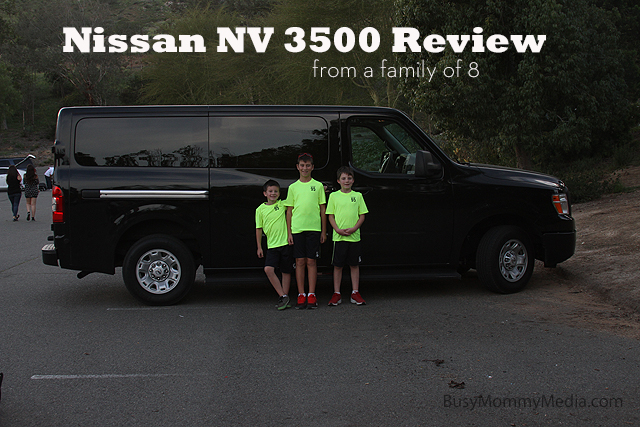 When we found out we were having twins, one of the first thing we realized was that we were going to have to go car shopping. I was driving a 7 passenger minivan and we were officially moving into “Yikes, how many kids do you have?” territory so we needed to size up.

We looked at everything, which is kind of hard to do when you are on pregnant with twins and on bedrest. The 8 passenger minivans were too small when you considered the number of carseats we needed and the size of my older kids. The full size SUVs just weren’t convenient to get to the third row when you have the second filled with car seats. That left us with full size vans and, I’m not going to lie, that scared me to death.

The first time I sat in a full size van I cried. How in the world was I going to be able to drive that? Our car options caused me some serious anxiety during my pregnancy. After nearly losing my toddler just after the twins were born I decided there were worse problems to have so I sucked it up, stopped stressing about it and we made the jump to a full size van.

We ended up going with the Nissan NV 3500. Out of everything that we drove, it felt like the best fit for us and even though it took me a little while to come around to the idea of a full size van, I’ve actually really liked it. You definitely can’t beat the space — I can take a double AND a triple stroller out with us and still have room for all the kids and groceries. There’s no way I could have done that in my minivan. 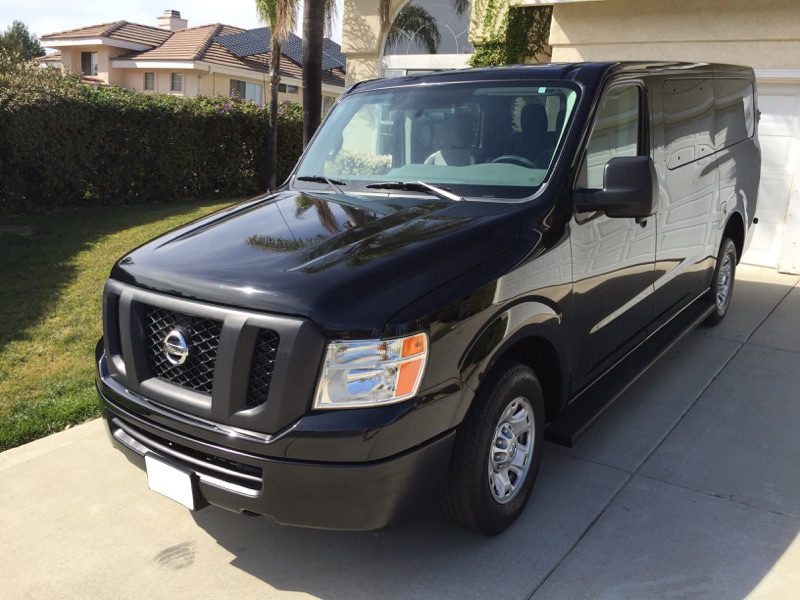 Here are a few of the things that we’ve really loved about the Nissan NV:

1. It’s not ugly. Always a plus, right? We looked at so many vans and one of the things that was so discouraging to me was how commercial-like they all looked. I didn’t want to look like a daycare center when we left the house! The Nissan NV looks like a big SUV to me and we actually get complements on it all the time.  A lot of people don’t even realize it’s a full size van because it looks so much like an SUV so they are shocked when they find out how many seats it has in it.

2. There are so many seating configurations. Nissan claims there are 324 ways to configure the seats. I actually didn’t think we’d change the seats around very often but we probably rearrange the seats in our van once a week. It’s so easy to pull out the seats and move them around or take some out. We even leave carseats installed on the seats when we move things around to save time. The second and third row are each made up of a double seat and a single seat. The back row has two double seats. We usually have at least one of double seats in the fourth row out to leave room for an extra stroller but sometimes we’ll also pull out a few of the single seats up front to open things up a bit when we don’t need the extra passenger seat. Whenever we go to the beach we set the van up with three rows of 2 going straight back because that gives us the space to fit a full size surf board in the van. My husband even took the van camping the other week without third and fourth row in and he was able to fit a queen sized air mattress in the back. The seats are heavy but I can get the single seats in and out just fine on my own. The double seats have wheels on the back so once you pop them out of the van you can roll them where they need to go.

Here’s what the NV looks like with 3 rows of 2 after one of our trips to the beach. On a side note, we believe in child labor around here. It doesn’t hurt that this one had just seen the new Cinderella movie and currently thinks cleaning is awesome. 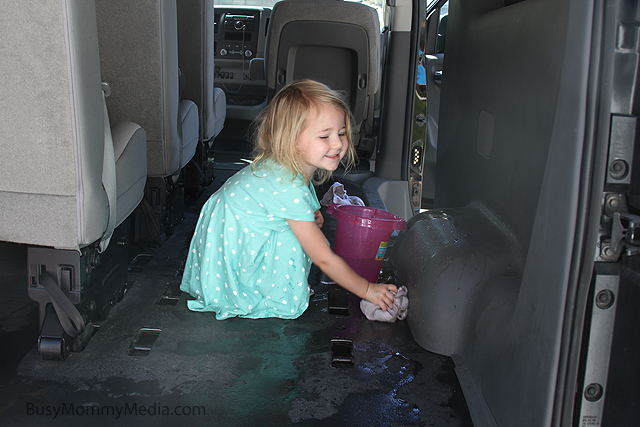 There are headrests. I couldn’t believe how hard it was to find a vehicle that fit 8 people and also had headrests. That’s crazy to me. I couldn’t imagine putting my kids in a car without something as basic as headrests. The Nissan NV has headrests on every seat and rear airbags. Your rear visibility is seriously limited because of the headrests but the van has great mirrors and you always have the option of a backup camera. The NV even has rear airbags, which was also surprisingly hard to find in full size vans so I feel a lot better knowing I didn’t have to give up some of the most basic safety features when we switched to a full size van. 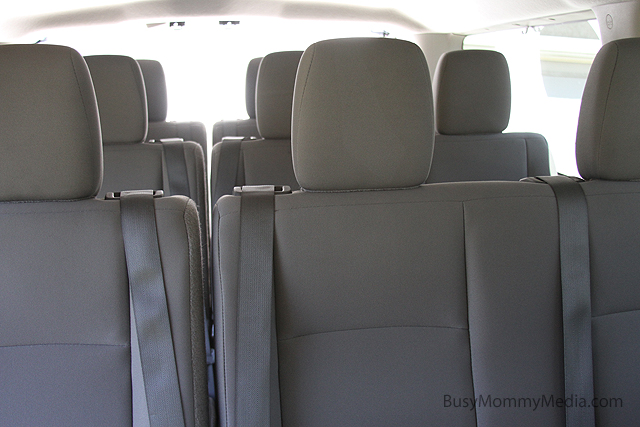 It has SPACE! With 6 kids, you can never have too much space, especially when you are putting everyone together in a van. My husband makes fun of me because I don’t go anywhere without at least 2 strollers. With the twins, it helps to have options and my strollers are the only way I ever leave the house at all. We took our van on a road trip a few weeks ago and now I don’t know how we ever managed with our minivan. Even with 4 kids, when we used to take road trips in our minivan everyone was buried in stuff. Kids had their feet resting on stuff, stuff fell out of the van when we opened the door, you get the idea. This time, traveling in the NV was like night and day. Everything fit in the trunk (minus 2 seats) and each kid had plenty of room. The inside of our van looked empty when we were all packed up and ready to go because we didn’t need to fit anything up in the passenger section of the van at all.

Because I can fit so much stuff in the van, it actually makes it easier for us to leave the house. I always keep a box of snacks, a first aid kit, and multiple strollers so I just have to load the kids. Now I have no problem loading up the kids and getting out of the house . . . provided everyone can find their socks. 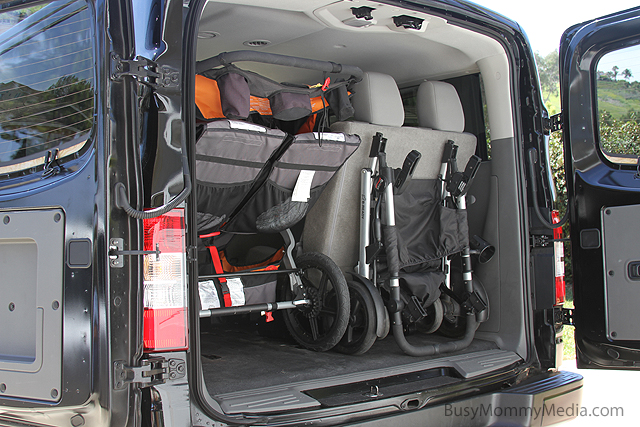 It’s easy to drive. You guys, I was SO worried about driving  full-size van. This thing is definitely huge. When we first brought it home I didn’t know how I was every going to get used to driving it. It didn’t take long before it felt normal to me though. Parking has been a bit more of a challenge, but I wasn’t a great parker to start with. I still hunt for parking spots that are a bit further away so I have more space to park. The NV does fit in any normal parking spot but it doesn’t have a real tight turning radius so if the parking aisles are on the narrow side it can be tricky to get the right angle. I haven’t hit anyone yet though so I think I’m doing okay. We even regularly back the NV into our driveway to make it easier to load and unload kids and I’ve gotten used to doing that just fine. So, yes, it is a big vehicle but you’ll get used to it.

Everyone is comfortable. Each of the 12 seats in the Nissan NV can fit a full size person. The smallest seats are in the fourth row where there are 4 seats across instead of 3 so they are a bit narrower but even there I can sit comfortably. I was worried about kids getting car sick with a van this big and while it does bounce around a bit sometimes the air conditioner works great so even in the last row there’s plenty of air flow. The front passenger seat reclines to a nearly flat position so it’s amazing for road trips. On our last trip my husband, who is over 6 feet tall) was able to lay flat and take a nap. There’s plenty of leg room on each seat. If you don’t need the full 12 seats you can even shift the second and third row back a bit to create more leg room. 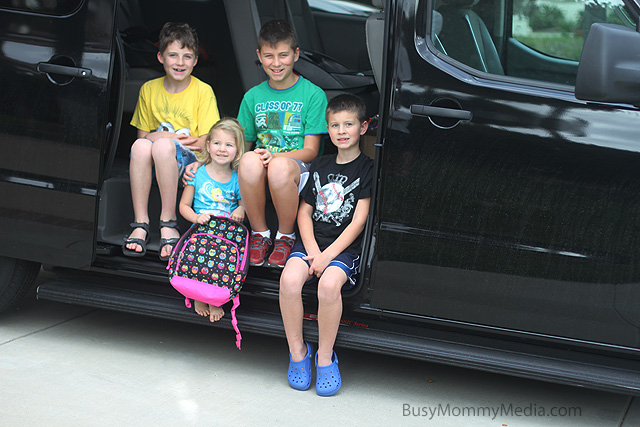 It has a sliding door. Now, if you are used to driving a minivan this may not seem that exciting, but sliding doors in full size vans are hard to come by. Since parking something this large is already a challenge, I definitely didn’t want to deal with doors that opened outward like you find on most full size vans. The sliding door on the NV makes it easy to unload kids in tighter spaces and it’s easy enough to use that my 7 year old can do it. It does slide quickly though so I’m dreading the day one of my kids get their hands caught in the door but so far that hasn’t been an issue.

The Nissan NV 3500 has been a great van for my family and we are going to get a lot of use out of it over the next several years. If you are considering a full size van, it’s definitely one you should consider.

If you have any questions, ask them in the comments below. I’m happy to try and answer whatever I can. 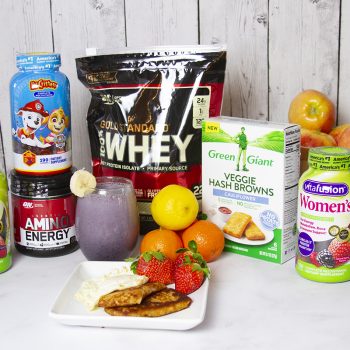 I’ve partnered with Green Giant, Optimum Nutrition, vitafusion and L’il Critters as part of an … END_OF_DOCUMENT_TOKEN_TO_BE_REPLACED